The people’s Deputy from “BPP” faces a fine in Germany 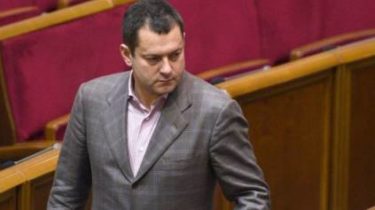 The people’s Deputy from “BPP” faces a fine in Germany

He broke the law on combating money laundering.

In the German transparency register, created last year, according to the amendments to the law on combating money laundering, there is no information about beneficial owner of three German companies that belong to the Deputy of the Verkhovna Rada Maxim Efimov (fraction of PPB).

This is shown by the extract from the register provided on the request of DW.

We are talking about companies owned by Efimov through companies in Switzerland and Cyprus – Kratzenburg Windpark GmbH, Windpark Spremberg GmbH and W2E Windpark UG Kankel 3 KG. These companies are operators of wind farms in different regions of Germany.

Special attention of politicians and officials

Beneficiaries companies that have business in Germany through companies in third countries (including offshore), was the first of October last year to report their data for inclusion in the transparency Register. The registry is designed to German law enforcement and tax authorities have had the ability to easily check the ownership structure of the business, to prevent possible tax evasion or money laundering.

Special attention when checking the legal origin of the investment, given the risks of money laundering control authorities to devote to the business, monitored foreign politicians and officials – the so-called “Peponi” (Eng.: politically exposed person).

Up to one hundred thousand Euro fine

Because the company Efimova reported its beneficial owner, each of them faces up to one hundred thousand Euro fine. At the same time, if the lawyers of the Deputy will be able to prove that the beneficiary was not named to conceal the owner, a “frivolity” – say, because of ignorance of the law – the maximum penalty is half that – up to 50 thousand euros. It follows from the explanations on the website of the Federal administrative agencies entrusted with the monitoring of compliance with the requirements of the transparency register. The amount of the fine depends on the turnover of the company and recognizes whether a business entity is guilty and whether will show a willingness to cooperate with regulatory authorities.

The most expensive Villa Germany belongs to the Ukrainian fugitive – DW

Deputy Efimov in conversation with DW noted that neither he nor the lawyers of his company was not aware of the new requirements of the German legislation. “To be honest, it’s a mistake. We will correct it”, – assured the Deputy. Data all listed German firms are in Ukrainian electronic Declaration Efimova.

Not the first time

Maxim Efimov is not the first current or former Ukrainian politician or bureaucrat that is not reported by the German regulatory authorities about myself as a business owner in this country. DW previously wrote about the plant in the East of Germany, which is included in the agricultural holding of Petro Poroshenko, and German business of the former head of the presidential Administration Borys Lozhkin. After the publication of the DW, as evidenced by the actual removal, the company Lozhkin Liwon Hilden GmbH have data about the beneficiary to the registry. Using a Cyprus company Lozhkin invests in property in Germany.