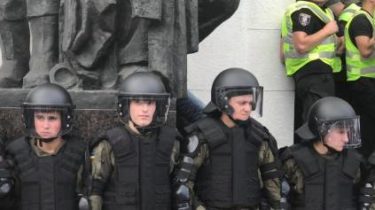 The clashes between militiamen and protesters under the building of the Verkhovna Rada of Ukraine on Tuesday, June 19, were injured as police officers and activists.

About it reports a press-service of the Ministry of internal Affairs.

“The activists were trying to break into the Parliament building. The police and the guards stopped the violators of public order. But during the clashes injured several law enforcement officers and citizens”, – stated in the message.

It is noted that three police officers were hospitalized, one of them was damaged due to the use of pepper spray, another security official received a traumatic brain injury and other injuries.

The interior Ministry also said that the traffic on the street resumed. The police and national guard guarding the civil order near the Parliament building.

Videoswelcome under the Verkhovna Rada: the veterans demanded the resumption of benefits

Clashes with security forces, tear gas and injured militiamen. Peace rally Afghans, Chernobyl veterans and miners, which took place in the morning in the capital, after lunch turned into an attempt to storm the Verkhovna Rada. Security forces pushed back, deputies blocked in the building. About the developments and the demands of the protesters see in the story. We will remind, under walls of the Verkhovna Rada on Tuesday, June 19, took place the meeting of veterans of the wars in Afghanistan and miners. The activists demanded the restoration of benefits, and expressed outrage because of the size of social payments.