The head of the GPU accused the procedural Committee in violation of the law.

The General Prosecutor of Ukraine Yury Lutsenko complained about the impossibility of consideration in the Verkhovna Rada representation on the withdrawal of immunity from four deputies from-for rough violation of the law regulations Committee.

He said this during a speech in the session hall of the Parliament.

“Unfortunately, I have to admit that all these ideas now can not be considered due to the fact that all requirements of the law on Regulation were disrupted during the consideration of this question, and in fact, the failure to examine this issue. The procedural Committee BP, to be considered by the attorney General in his presence, was collected separately and returned the documents to the Prosecutor General, the head of the Verkhovna Rada of Ukraine in connection with the fact that they do not understand what they received,” – he stressed.

According to Lutsenko, the Committee made a gross violation of the law on domestic regulations because of the “obvious unwillingness to pass on to the consideration of my presentation in the session hall”.

“Neither the law nor the internal Rules do not allow the Regulatory Committee to return the submission to the attorney General, in addition to two statutory cases: if performance does not meet the requirements of article 218 of the Regulation, and in the absence of sufficient evidence to substantiate the submission,” said he, adding that in both cases he had to attend the Committee.

In turn, Lutsenko said that it was not at the Committee meeting.

“And it was not during my participation on the submissions in respect of the MP Vilkul and relatively MP Kolesnikov. Nevertheless, the Committee sent a submission without actual consideration of my participation, as the law says, the Chairman of BP to return to the GPU,” – said the head of the Prosecutor General.

Yury Lutsenko asks the Verkhovna Rada to remove parliamentary immunity opublikoval Alexander Vilkul and Dmitry Kolesnikov. In the submissions that have already entered the Parliament, we are talking about land transactions of those times, when the politician was the head of Dnipropetrovsk regional administration. And Dmitry Kolesnikov, as Chairman of the Agency of state property allegedly helped to bring 7,000 square metres of real estate from a public entity in the river. 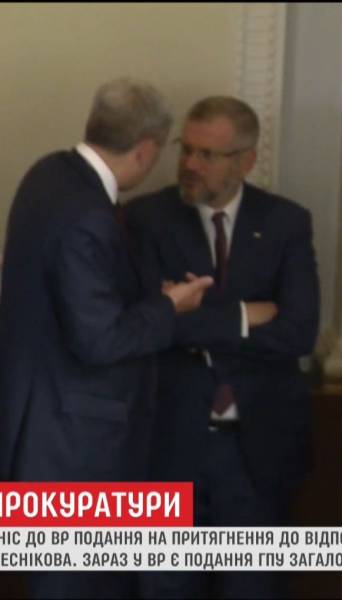 Thus terms of consideration of representations against Kolesnikov and the administration was disrupted, and therefore could not be entertained, otherwise they will be challenged in court.

“The idea of people’s Deputy Ponomarev was considered in Committee, sent to the Chairman of BP, but with deadlines that today makes it impossible to consider in this hall”, – Lutsenko told, having assured that will make a presentation about these four people’s deputies in BP again, but it will happen at the end of August, soon after the deputies leave.

We will remind, earlier “the opposition bloc” has sharply reacted to the possible withdrawal of immunity from two MPs, calling such actions “repression and slap in the face”.