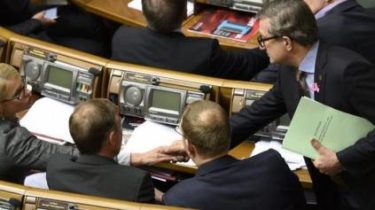 Ukrainian politics is not the first year can’t solve the problem with the restart of the CEC.

Renewal of the composition of the Central election Commission of Ukraine – the main political intrigue of this week. The presidential election is still 9 months, but the nerves of politicians pass. Yulia Tymoshenko, a likely presidential candidate, accused Petro Poroshenko, in collusion with leaders of the terrorist “LNR” and “DNR” in the preparation of war against its own people.

“Poroshenko wants to initiate the beginning of the great war. He wants the occupied territory Ukrainian, he wants to burn all essentially burned to the war already broke up and went to the highest level. That is, the President, through the inflation of war wants to hold elections in principle”, – said Tymoshenko.

“It’s like a political adventure”: as the members of Parliament converged in the clinch because of the new composition of the CEC

The response from the opposite camp do not have to wait long and already the very Tymoshenko was accused of duplication of the Russian propaganda slogans.

“The idea that President Poroshenko of Ukraine to provoke this summer’s attack on the “DND” and “LNB” to provoke a response from Russia, actively spinning in the last month, all Russian state and the separatist resources including,” – said political analyst Taras Berezovets.

On the other hand, in recent times spread a lot of rumors about non-standard options that will allow the President to stay in power or break the logic of other candidates in preparing for the elections. Such a breakdown of the pen, too nervous, was a loud move in the Parliament of the faction Poroshenko. It was about the election of new members of the Central election Commission, which it was necessary to appoint a few years ago. When, finally, it came down to it, the presidential party proceeded to cheat, making the 13 vacancies in the CEC 14 candidates. The majority of the Parliament protested, suspecting evil game.

“It’s like a political adventure – log in lifting of the CEC, without a clear design of what will be the next part of a renewed CEC. Because 14 candidates for 13 posts, please tell me which of them is superfluous?”, says Maxim Burbak, the head of the faction “people’s front”.

“The President or the President’s faction would have to agree with one of his candidates to withdraw because their more and their quota enumerated, but they do not want to do,” added Olena Sotnyk of “Self help”.

Discord in the coalition became apparent, the bloc of Petro Poroshenko has decided to go VA-Bank, and pointedly left the hall, saying that without their votes, no Parliament’s decision will not be accepted until the Parliament accepts the presidential version of the CEC. The easy option of blackmail.

The strange thing is that the whole mess around the CEC, a purely technical body, which should just count the votes in the elections. However, the President gave reason to doubt the purity of their intentions. All the talk that he wants to have unfair influence on the CEC.

However, VA-Bank of the BPP was zilch, because within a few hours, as the Parliament wiped his nose with the side of the President, having effective voting without the largest faction. And there is another intrigue. In lie fueled by rumors about the risk of early dissolution of Parliament because of the termination of the largest faction of the coalition, and therefore Parliament as a whole. The President wants this or not, but now he has taken this formal opportunity.

“The mind may be enough for each to accept such decision. I do not exclude that this could happen. Although this solution is completely artificial: there is no nature for this decision, there is no parliamentary crisis, even if there are doubts about the existence of the coalition – Parliament still works, even if it is a minority government – it still works”, – convinced the Vice-speaker Oksana Rawfoodist.

The political emotions was lost just a decision on the new composition of the CEC and, consequently, the legitimacy of the upcoming presidential elections.

Next week – the last before the parliamentary recess, which will last until the autumn. Exactly the time when the government, putting aside political differences, should just do their technical homework, appointing the Central election Commission. It is not excluded that the deputies deliberately delaying the time to consider a more selfish question: depriving the MPs of immunity.