The fighters 13 times violated the ceasefire regime – the headquarters EP 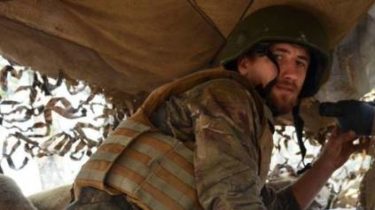 The fighters 13 times violated the ceasefire regime – the headquarters EP

The enemy fired mainly with the use of rocket-propelled grenades, heavy machine guns and small arms.

For the last days fighters 13 times violated the ceasefire – none of Ukrainian defenders was injured. The enemy fired mainly with the use of rocket-propelled grenades, heavy machine guns and small arms, the press center of staff of environmental protection.

Russian occupation troops set violated the truce almost on the line of contact.

On the Lugansk direction in the area of human settlements Old Aydar and Crimean enemy continued to use grenade launchers and small arms.

Fighters again wounded Ukrainian fighters. The situation in the Donbass

On swetlogorsk direction the enemy opened fire with small arms in the area of the locality Novoluganskoe.

In the direction of Donetsk over the past day were restless near the settlements Peski, Krasnogorovka and Novotroitskoe. Here the enemy rocket-propelled grenades, heavy machine guns and small arms opened fire on the positions of the joint forces.

Mariupol direction remains an area of active provocative actions of the Russian mercenaries. 6 times the occupants tried to force our defenders to open fire in response. Using grenade launchers, heavy machine guns and small arms, the enemy fired at positions near the settlements SHIROKANE, Water and Food.

The militants fired at all directions on the front lines, wounded of the Ukrainian fighters. The situation in the Donbass

On the eve of Pro-Russian militants 30 times resorted to fire on the Ukrainian positions, once applying the Minsk agreements prohibited weapons. Losses among the Ukrainian military no.