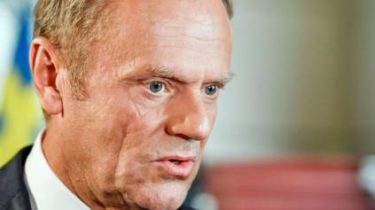 The President of the European Council stressed that Europe was expecting the perpetrators to justice.

The Russian government should admit guilt for the downed Malaysian Boeing 777 in the sky over the Donbass in 2014.

This was stated by the President of the European Council Donald Tusk during a press briefing with Petro Poroshenko and European Commission President Jean-Claude Juncker.

“Today we remember the tragic Downing of flight MH17. Two weeks ago at a summit in Brussels about this tragedy recalled the European leaders. We commemorate the victims and call on Russia to acknowledge its responsibility for the tragedy and the expected prosecution of those who is guilty in it”, – he stressed.

Recall, may 24, 2018 joint investigative team (JIT), which is investigating the shooting down of the Malaysian Boeing over the Donbass July 17, 2014, presented interim results of their work. At this time, the investigators found that the Buk missile system, which was directly hit by Boeing, refers to the 53rd anti-aircraft missile brigade of the Russian armed forces, which is stationed in Kursk.

In turn, a group of independent investigators Bellingcat has established the identity of the Russian GRU officer, who is responsible for the destruction of MH17. Is Oleg Ivannikov Callsign “Orion”. In particular, he supervised the delivery and transportation of weapons in the occupied Ukrainian territory. He performed the same function and during the fall MH17.