Poroshenko met with trump. It became known what he was talking about presidents 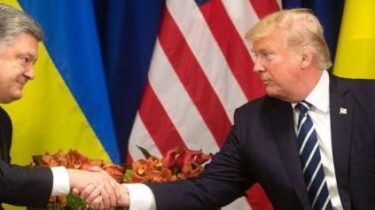 Poroshenko met with trump. It became known what he was talking about presidents

Among other things, the two leaders discussed the US strategy on the fight of trump and Putin.

President of Ukraine Petro Poroshenko met with his American counterpart Donald trump on the sidelines of the NATO summit in Belgium.

This was announced on his page on Facebook the Ukrainian political analyst Pavlo NUSS.

“Despite the lifting of most of the bilateral meetings the U.S. President, his talks with Poroshenko took place,” he said.

According to NUSS, during bilateral negotiations, consultations, the presidents discussed, among other things, political and defence relations between Ukraine and the USA and also the US strategy at a future meeting trump with Putin.

“Trump meeting with Poroshenko in the first place, suggests that the United States of America and Ukraine are strategic partners, and that partnership and shared values can not be neutralized in the interests of Moscow”, – he said.

Poroshenko to meet with trump! Despite the abolition of most of the bilateral meetings of us President, ego…

We will remind, on July 11-12 in Brussels continues the annual summit of leaders of the countries-members of NATO. On the second day of the scheduled joint meeting of the Commission NATO-Ukraine-Georgia, as well as meeting members of the Alliance with partner countries.

Trump’s threats to withdraw from NATO and the joint statement of Ukraine, Georgia and the Alliance. Text online summit

The results of the first day, the leaders of the NATO countries adopted a joint Declarationwhich called on Russia to withdraw troops from Donbas, Ukraine is to comply with the terms of the Venice Commission on the language of article of the education law, confirmed the non-recognition of Russian annexation of the Crimea. Alliance members also agreed to create an Initiative alert, denounced the destabilizing actions of the Russian Federation, expressed concern about the situation with chemical weapons and wars in the middle East, supported the denuclearization of the DPRK. Finally, NATO agreed to start accession negotiations with new member – soon to join the Alliance of Macedonia.