New lawyer Savchenko became the defender of the controversial Shtepa 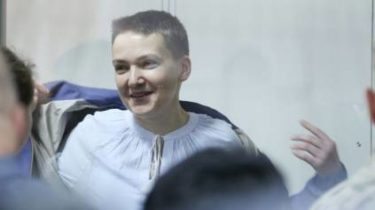 New lawyer Savchenko became the defender of the controversial Shtepa

The MP received first a free lawyer because of the absence of his defence.

In the Shevchenkovsky court of the capital Nadezhda Savchenko has appointed a new lawyer.

The MP got a free lawyer because of the absence of his defence, writes “Gromadske radio”.

“To appoint counsel of Hope Savchenko to conduct certain proceedings and participate in the consideration of the petition,” said investigating judge Vladimir Bugil.

However, after the break, a new lawyer Savchenko contract – Alexander Tananakin. He defended the ex-mayor of Slavyansk Nelia Shtepa, which in 2014 was arrested on suspicion of terrorism and encroachment on the territorial integrity of Ukraine.

Since there was a lawyer under the contract, the court took the state’s lawyer and adjourned the case to a new attorney Savchenko familiarized with the case materials.

The term of arrest of the Deputy ends today.

As you know, on March 22 the Verkhovna Rada withdrew with Savchenko immunity and approved the criminal prosecution and arrest.

On 23 March, the Shevchenko district court of Kiev chose Savchenko measure of restraint in the form of two months under arrest, and the MP went on a hunger strike.

On 22 June, the court upheld the decision in relation to detention of people’s Deputy of Hope Savchenko.

Videosevennine the court will decide whether to leave Savchenko in jail

The prosecution believes that it is necessary to keep the suspect behind bars, and the defense calls for a night of house arrest. Savchenko is accused under several articles, one of them is the preparation of a terrorist attack.