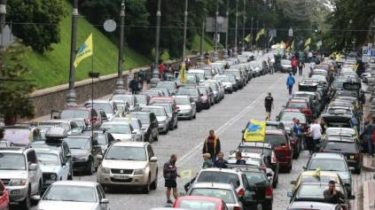 Taxes on such vehicles is reduced in several times.

The Verkhovna Rada adopted in first reading a bill 8487 “On amendments to the Tax code of Ukraine concerning the taxation the excise tax of passenger vehicles.”

Include the liberalisation steps:

The mechanism consists in establishing a new excise tax rates: the basic rate will be 50 euros for petrol engines and 75 euros for diesel. Rates are increased by a Factor of age and the Ratio of the volume of the engine.

The definition of excise tax for each passenger vehicle will be carried out by applying to the basic rate of excise duty ratios. According to the explanatory Memorandum, one coefficient will be determined by dividing the volume of a cylinder of the internal combustion engine of the corresponding vehicle in cubic cm 1000 cubic cm the Second coefficient is equal to the number of full calendar years from the year following the year of production of the relevant vehicle prior to the determination by the tax rate (for new vehicles and vehicles that were used up to one full calendar year, the coefficient is 1).

The new car will go lower excise duty. On senior more, but because its value is less than, respectively, less the VAT and import duty. Thus, the amount of customs clearance will reach 2500-3000 Euro for all cars, regardless of age.