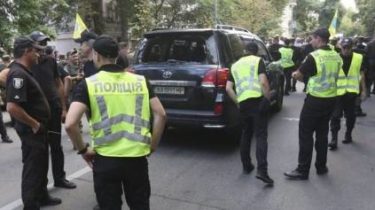 The man who broke the glass in the car, was detained.

Militiamen began criminal proceedings on the fact of road accident and vandalism in the government quarter of Kiev on Thursday, July 12.

“The event information included in the Unified register of pre-judicial investigations. Initiated criminal proceedings under part 2 of article 296 (Hooliganism) and article 286 (violation of the rules of road safety) of the Criminal code of Ukraine”, – stated in the message.

According to police, dozens of activists began to block traffic at the intersection of Institutskaya and Garden and smashed the rear window of the car “Toyota lend kruzer”. In the incident one of the men received a leg injury, after which he was taken to the hospital.

Militiamen identified the personality of the activist, who is reasonably suspected damage to the vehicle, he was a resident of Kiev, born in 1991, and arrested the offender.

We will remind, in the center of Kiev a few days protesting car drivers on the so-called EuroBLECH. The protesters demanded cancellation of the decision of the Cabinetin which police have access to the customs database, so you can check the legality of stay “EuroBLECH” in Ukraine. A second requirement is the adoption of the law on easing of customs clearance.

13 July, the Parliament in the first reading approved the bill to reduce the tax on cars from Europe. Taxes on such vehicles is reduced in several times.