The US President talked about the support of American intelligence.

In the White house during press conference of U.S. President Donald trump turn out the light. It happened after he said that he agreed with the conclusions of U.S. intelligence about the Russian intervention in the elections of the President of the USA 2016.

Trump has said he “fully believes in and supports the American intelligence agencies”, and that after these words, suddenly the lights went out.

“Oops, they turned off the lights. It must be the intelligence services,” said trump.

Trump should have been so bold to Putin: in the Senate “blew” the justification of President of the United States Helsinki

Then the lights came back on and the US President continued his press conference concerning results of negotiations with Russian President Vladimir Putin.

We will remind, on July 16 in Helsinki, the long-awaited meeting of the presidents of the United States and Russia. At the press conference, trump and Putin has told that talked about Syria, Crimea, bilateral relations and Russian intervention in the American elections. To the question, does trump the US secret services, which concluded that Russia has intervened in elections, compromised computers candidate in the presidential election of 2016, Hillary Clinton, the us leader said he was not sure that it is the handiwork of Moscow.

American policy speech, trump criticized, calling it “terrible.” A day after the press conference with Putin , the US President said he supported the findings of the investigation concerning the Russian intervention in the American elections.

12, the US accused Russian spies meddling in the presidential election. They, in particular, accused that they have hacked the mail server of the leadership of the US Democratic party candidate for the elections which was Hillary Clinton.

Videopoke the meeting with Putin, the Americans met with trump shouting “traitor”

Massive protests, Americans met trump after the summit with Putin. Dozens of activists with placards, shouting “traitor”, gathered at the White House. The behavior of the American President criticized his opponents, and even colleagues in the Republican party. The main thing that outraged society – tramp standing next to the Russian President, said: no conspiracy with the Russians at his election headquarters was not because he was assured Putin. 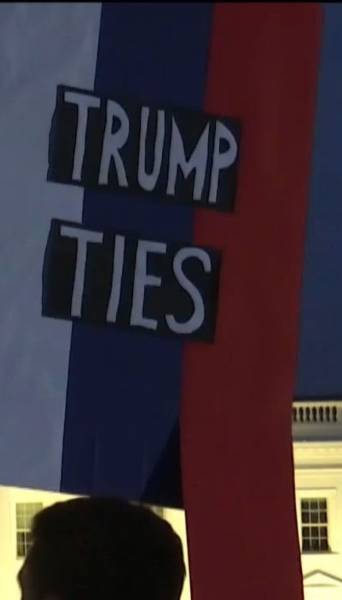