On the outskirts of Kiev, the family of three people burned alive 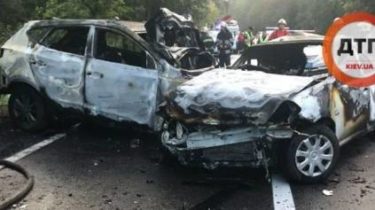 On the outskirts of Kiev, the family of three people burned alive

Three people with injuries gospelpower to the hospital.

On ctaroobuhovskoy track near Kyiv there was a terrible accident, in which three people died and three were injured.

About it reports the 5th channel.

The accident occurred the evening of July 20 on the outskirts of Kiev. Previously it is established that one of the cars, deglavas from the capital, has left on an oncoming lane. The collision of two of the three cars caught fire. The fire was so strong that rescuers could not immediately approach the car.

Road accident in nikolayevshchina: the passengers on the bus shared what they had to endure

Three victims were able to get out of his car – they were taken to the hospital. Three of the victims were trapped in the among them – one child.

“They are out. And here is locked and we are unable… the Front is opened, but there was no one to get. When burned, the child was impossible to get. Although she still seemed to be alive,” – said the lifeguard Basil Briginets.

All about the terrible accident in Zhytomyr region: the bus driver had no right to transport passengers

We recall the morning of July 20, there were two terrible accidents: in Mykolayiv region and Zhytomyr under the minibus collided with a wagon. In the first case, five people were killed and another 12 injured. As it turned out, the bus drove the Belarusians. In the second accident, 10 people were killed, including one child, and another 10 injured.