Russia urged the media “to delicately illuminate” the subject of health. 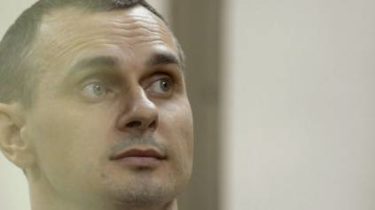 Russia urged the media “to delicately illuminate” the subject of health.

Russian Ombudsman communicated with the prisoner of the Kremlin through the video.

The Commissioner for human rights in the Russian Federation Tatiana Moskalkova communicated via video calls with Ukrainian political prisoners, filmmaker Oleg Sentsov, held in a prison in Russia.

“I had a conversation with Oleg Sentsov via video. The conversation lasted almost half an hour, talked about his health, about how he communicates with relatives, family. He said that the right to use the calls to communicate with her sister, reads a lot, says that in the colony a good library,” she said.

According to the Ombudsman, Sentsov told her that is constantly doing something to occupy your time and thoughts, writes and reads.

Moskalkova also called on the media to delicately approach the coverage of the topic of the health condition of Sentsov.

“I ask the media as delicately as possible to treat the coverage of health Oleg Sentsov. Recently, there were reports in the media about the fact that Sentsov is in critical condition, but he said today that this question often exaggerate”, she said.

“I asked him if you need to contact me, said that they are ready to provide him with necessary assistance”, – concluded Moskalkova, adding that Sentsov had not expressed to her any requests.

On may 28, the Federal service of execution of punishments stated that Sentsov has agreed to supportive therapy.

The Ombudsman Lyudmila Denisova for five days trying to meet Sentsov, however, she refused to even video.