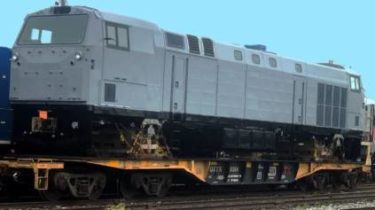 “The locomotive of a train to Norfolk, Virginia, and then a ship across the Atlantic, the Mediterranean and the Black sea to the Black sea. The final fitting will be conducted at Krukovka carriages (Kremenchug, Poltava region). It will then be commissioned and will start to transport the goods”, – wrote in Facebook the acting Chairman of the Board of “Ukrainian Railways” Evgeny Kravtsov.

We will remind, on February 23 this year signed a framework agreement worth up to $ 1 billion, which implies a long-term 15-year collaboration between “Ukrzaliznytsya” and General Elecrtic. The total volume of the party, which will supply General Electric, will be at least 30 locomotives. And she, as planned, will be only the beginning of many years of cooperation.

Earlier it was reported that the locomotive crew of “Ukrzaliznytsya” will be taught the rules of operation and maintenance of locomotives General Electric series ТЕ33АС. Already selected 10 operators, which in the second half of August will be trained in the “Center of evaluation and staff development of railway transport” in Astana. Training in accordance with the agreement will be held for the funds of General Electric. After training, the operators together with the specialists of personnel services “Ukrzaliznytsi” deployed full cycle of theoretical and practical training of their colleagues in the field.