Dozens of attacks and two dead warriors. A day in the area of environmental protection 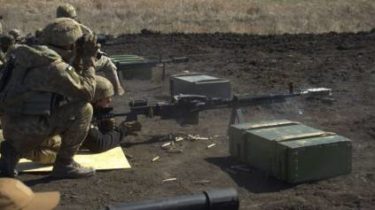 Dozens of attacks and two dead warriors. A day in the area of environmental protection

During the day, August 18, fighters of “DNR/LNR” in the Donbass 43 times violated the silence shelling of the Ukrainian military.

This is stated in the summary of operations of the joint forces.

MFA: Ukraine will be able to introduce evidence of the use of the Donbas Russian radio-electronic weapons

Against the combined forces applied to grenade launchers, heavy machine guns, small arms, and the positions of the Crimean – banned 120-millimeter mortars. Near Kryakovki, Avdeevka and Verhnetoretskogo attacks were conducted from mortars caliber 82 millimeter.

Resulting from militants ‘ shelling two Ukrainian soldiers were killed and two were injured.

During the night, August 19, the terrorists have already made four attacks in the direction of the Ukrainian military. However, there were no losses.

Earlier it was reported that during the Saturday, August 18 from seven in the morning until 18:00, on Donbass fighters 10 times opened fire on the Ukrainian positions. Including one time from heavy weapons.