Recessed bike is already lifted from the bottom of the river.

Broke, stole, and now drowned. In Kiev, the camera recorded how the youth throws in the Dnieper rolling bike. The rental service of two-wheeled transport appeared in the capital recently. Over four thousand conscientious people of Kiev went and returned. But this bike no luck.

Video surveillance is seen as a rental bike on the waterfront in the Dnieper throws a guy in a bright t-shirt. Seven Wednesday morning. Surveillance cameras record four. The guy with the tattoos – wheel bike to the pier. And there’s already two others throw him down the stairs. Several times.

See also:
Bickering in action. Is there a future of bicycles in Ukraine

Director of the network of Bicycle Alex Kushka in the morning put the video with the bullying two-wheelers in your Facebook call to find vandals.

“Previously wrecked the bike, broke the rear fenders, special hood and it was at the Postal square”.

Alex Kushka says that the bike didn’t take away from the rolling station. Probably someone after the trip it just left unlocked in the street. And he became the bait.

After the sinking of the Bicycle, a group of youths tried to stop the guard and two witnesses. But in vain. Within hours after the publication of the photoproofs social media users identified the three from this group. Arthur, Nikita and Anastasia. A guy in a light – yet unknown.

“We didn’t know he was stolen as it was in the result. I thought, well, man wants your bike, as we thought, to throw away, that we will stop” – justified on the phone, Anastasia.

It is not hidden, from social networks have not disappeared, unlike his friend. Today, his instagram has closed. But it was a photo from the tattoos, which one of the guys identified. Anastasia insists, in the water throwing a bike a guy in a light. Who is he – doesn’t know him. So her company is in no way to blame.

Rental service of two-wheelers appeared in the capital recently. More than 4 thousands of conscientious people of Kiev went and returned. But one bike out of luck: the youth threw it into the Dnieper. Found if those who abused the bike and now what will be next in the story. 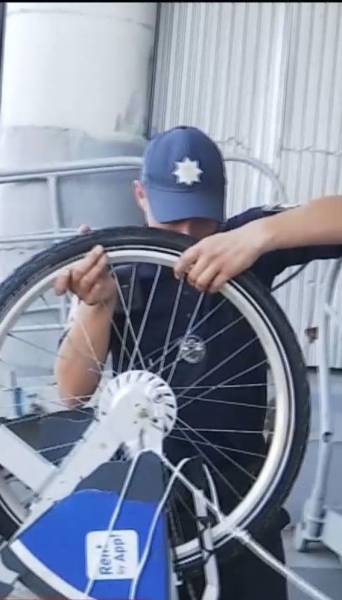 The girl says to the police they will go. But while they did not cause.

These two days the bike was at the bottom of the Dnieper river at a depth of 12 meters. And today in the evening we were wishing to get him out of the water without scuba gear. Not for yourself, for the investigation, though for a fee. The police, the Director of Bicycle and Rustam spent on the dock the whole operation. Bare hands, without diving gear, the man dives and gear the bike for the ropes. Mutilated, but a clean bike, comes out of the water. Now his way to the workshop.

“Someone would have used it, and so, alas, will stand. I think they will do,” – said the Director of the Bicycle.

The fourth guy in a light police are still looking for. As co-owner of the rental says despite the incident, people are not desperate. And business will not close.