Smothered with a pillow and beat him with his fists. Actor “Matchmakers 6” make fun with wife 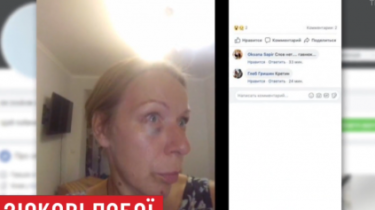 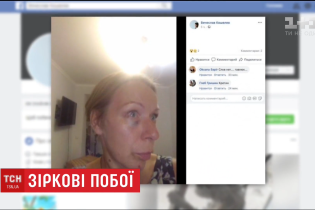 Smothered with a pillow and beat him with his fists. Actor “Matchmakers 6” make fun with wife

The couple had already ended the relationship.

The actor of the series “Matchmakers-6” Vyacheslav Koshelev cruelly mocked with the wife, then the photo with her image appeared on the Internet.

Black eye and bruises on her face – scandalous photos of a battered wife Elena Savchenko appeared on the website of actor Vyacheslav Koshelev in Facebook. The photo was the bold caption: “And here’s how I decorated it, let him say thank you, not smothered with a pillow, now let them lie in neurosurgery, I think…”.

Controversial post just to make noise on the Internet. The indignant behaviour of actor-users of networks called the man crazy and a pervert.

“He knocks me on the sofa and here so, on-on, whole body! On the head, on! Then covers me with a pillow and starts to suffocate,” says Elena Savchenko.

The consequences of that terrible night still evident on her face. With tears in the eyes of Elena telling his story. That day, she came home early. Vyacheslav was already on the drunk. Due to issues at work, says Helen, the actor was increasingly applied to the glass and made a loud quarrel. It happened the day after mutual insults in the course went fists.

“I was in the window screaming, help me, save me, kill it and after that I was not attacked” – says the woman.

He Koshelev refused to meet, agreed to comment on the phone. Says Elena has an inflammatory character, she provokes a quarrel and a photo with the beating also posted it on his account.

“She went to my page and my page did it. I have not beaten her, the most interesting that I fought back. When the clothes were cut, it was scissors, then the hammer and then went the knife, all”, – said Vyacheslav Koshelev.

Scandalous photos beaten Elena Savchenko actor Vyacheslav Koshelev not only decided to put on his page in the social network, but added his bold signature. Controversial post just to make noise on the Internet. With tears in her eyes, Helen tells his version of the day. All this Elena calls nonsense. Says, in a civil marriage they lived for 8 months. Her 46, him 44. Thought about the wedding. But 4 months ago my husband started to drink. While living at her expense and at her apartment. After that fight, he says, he gathered his things and went to my mom finally promised that peace will not

“He gave me some money, but would like to tell you the truth, no more than 2000 USD per month. He threatened me with life, he said now, honey, I’ll live quietly not give. I said, will make it so that you don’t just die, you will die in agony,” says the woman.

After the scandal photos page actor removed. Colleagues in the theater about Koshelev say that the actor is talented, but the cooperation stopped due to family problems:

“Now he is temporarily suspended pending clarification of circumstances, and we do not see you before any concrete conclusion.”

Elena has written a statement to the police and says that in their stories husband and come to an end.